Looking for places to visit in Melbourne but want something more educational and, maybe, historical? Well, we got something that you’ll find useful!

Traveling through a city’s history is indeed a great adventure that never fails to amaze people. Historical landmarks are any building, site, structure or object that gives a historical significance to a country or a city. It helps people understand the history and the roots of a certain place.

Oftentimes, you will be surprised on the historical facts you will be able to gather on such a trip to any place you visit.

If you are one of those travelers who loves going through historical places, you would surely love this post we have prepared for you.

Browse through this places to visit in Melbourne list and check them out in person to satisfy your history cravings! You can surely include this on your list of Melbourne’s attractions for your itinerary!

Melbourne’s churches and memorials are seeping in history. Hence, remember to include the below places in your itinerary: Known internationally as a leading example of the Gothic Revival style of architecture, the St Patrick’s Cathedral is the cathedral church of the Roman Catholic Archdiocese of Melbourne.

The church has the distinction of being both the tallest and, overall, the largest church building in Australia.

The St Michaels Uniting Church was known as a centre of liberal theology and political radicalism under its outspoken minister since 1971, Dr Francis Macnab.

Built in the Lombardic architectural style, with multi-coloured exterior brickwork, open cloisters on the side of the building and Romanesque arches, the church’s architectural style is indeed one landmark travelers wouldn’t want to miss. Another on our list of historical places to visit in Melbourne is the Shrine of Remembrance.

Built as a memorial to the men and women to all Australians who have served in war, the Shrine of Rememberance is one of the largest war memorials in Australia. The Shrine has been the center of war commemoration in Melbourne for the past 70 years. With over 40 hectares of land, the Melbourne General Cemetery was established in 1852. Notable gatehouses with several heritage buildings, including a couple of chapels and a number of cast iron pavilions are featured on the area.

Aside from its churches, it’s leisure and entertainment centers are also a favourite place not only for fun but for learning history as well.

Added to our list of places to visit in Melbourne is the Royal Arcade.

The Royal Arcade is a heritage shopping arcade in the city. The arcade features a high glass roof and windowed stores with effigies of mythical figures Gog and Magog and a clock which chimes each hour on its south end.

One of the major landmarks in Melbourne, the Queen Victoria Market is the largest open air market in the Southern Hemisphere. The expansion of the market in the 1850’s caused several controversy at the time since it caused a re-interment of human remains from the closure of the cemetery nearby.

Melbourne’s rich history is also mirrored in its museums and collections. Here are some of its historical landmarks you should not miss: A World Heritage Site, the Royal Exhibition Building was completed in the year 1880. The building hosts various exhibitions and other events

Originally known as the Victorian Arts Centre, the Arts Centre consists of a complex of theaters and concert halls in the Melbourne Arts Precinct.

Major companies such as the Opera Australia, the Australian Ballet, the Melbourne Theatre Company and the Melbourne Symphony Orchestra regularly performs here.

Once the home of the Treasury Department of the Government of Victoria, the building had long been converted into a museum.

It permanently exhibits the Victorian Archival Treasures which presents a rich narrative of Victoria’s history from the 1830s, highlighted by key documents and artifacts from Public Record Office Victoria (PROV). The central library of the state of Victoria, the State Library of Victoria holds over 2 million books and 16,000 serials, including the diaries of the city’s founders. Few of the highlights when visiting the library are the chess room, arts library and reading room and dome.

One of Melbourne’s historic cottage, the La Trobe’s Cottage was built in 1839 and is included on the Victorian heritage list for its historical, social and architectural significance. The cottage gives an insight into early colonial domestic architecture and living arrangements.

Constructed in 1755 in North Yorkshire, the Cook’s Cottage was rebuilt (including all of its bricks) in Melbourne in 1934.

It is also part of the Fitzroy Gardens and is one of the oldest building in Australia.

Spend a day or two in the city’s historical parks and gardens too! Check out the following places below!

Conservatory at the Fitzroy Gardens The Fitzroy Gardens is a 26 hectares of floral beauties right at the heart of the city. One of its popular stops is the Conservatory.

The Conservatory is comprised of five separate floral displays and was opened on the year 1930. It is considered to be a vital part of Melbourne’s commitment for horticulture.

Melbourne’s meeting place, the Federation Square is one of the most visited tourist attraction in the city with its unique cultural precinct. Establishments such as The Ian Potter Center and Melbourne Visitor Center are located here.

It is always fun to watch games and performances with locals and tourists too! And what better way to do that in some of Melbourne’s historical landmarks! A 1488-seat theater, the Princess Theatre was first erected in 1854 by actor-manager George Coppin. The building is featured to have the world’s first sliding or retractable roof and ceiling and state-of-the-art electrical stage lighting.

The Athenaeum Theatre is one of the oldest public institutions and had been the home of the Melbourne Opera.

The Capitol Theater is a single screen cinema theater that opened in 1924. It is currently used for both university lectures and cultural events such as film and comedy festivals.

The Forum Theatre is currently used for concerts by many artists, having hosted performances by Oasis, Ozzy Osbourne, Katy Perry and many more. It was formerly known as the State Theater.

The central municipal building in Melbourne, the Melbourne City Hall is the seat of the Local Government Area of the City of Melbourne. The building has been used for multiple purposes such as theatrical plays, exhibitions as well as school concerts.

The Flemington Racecourse is a major horse racing venue notable for hosting the Melbourne Cup. The racecourse was first used in the year 1840.

Aside from the world-class racing you’ll get to witness, Flemington Racecourse also offers dining experiences and fashionable events.

Aside from this, the MCG is the largest in Australia, the largest stadium for playing cricket, and holds the world record for the highest light towers at any sporting venue.

Last but not the least, Melbourne’s towers and architectures are not only a marvel to look at, but a place to learn too. Here are some of its most historical places: It is considered to be the first railway station in an Australian city, plus the terminus for the first use of steam rail in Australia and the world’s busiest passenger station in the late 1920s. The Coops Shot Tower is a 50 meters high shot tower completed in 1888. It was saved from demolition in 1973 and was incorporated into Melbourne Central complex in 1991 underneath an 84 m-high conical glass roof.

The University Of Melbourne

The University Of Melbourne is Australia’s second oldest university. It  is also the oldest University in Victoria founded in 1853. The university also has several other campuses located across Victoria.

The Government House is the office and official residence of the Governor of Victoria. It reflects the extravagant style of the period when it was built due to the Victorian gold rush.

This historical building consists of three parts: the south wing with its extravagant single storey State Ballroom, a grand staircase hall entrance to the three storey State rooms and two storey vice-regal apartments to the north.

I know we all want an easy way to explore the city. I have below an embedded map of the places we have mentioned above. Just so you have a reference when you plan your itinerary!

Feel free to add more places and adjust the location. 🙂

Turn your next getaway into an educational travel aside from being fun and exciting! Watch out for more great and educational compilations right here!!! 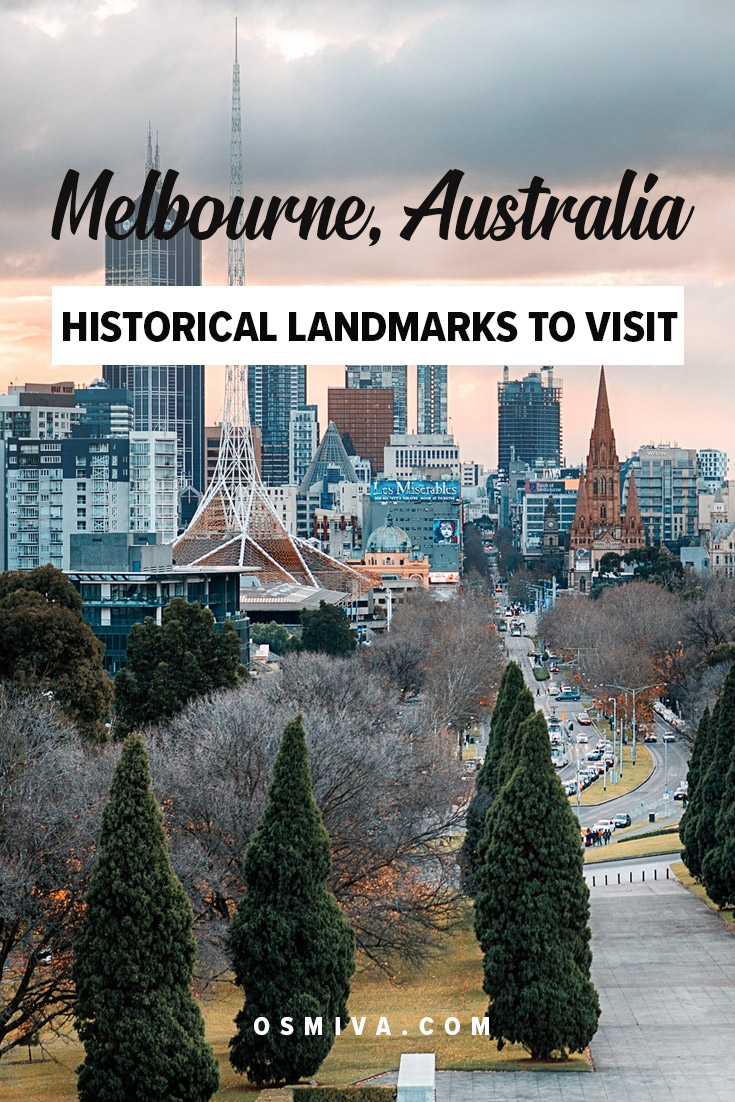