Review of the Free Walking Tour in Taipei – Historical Route

Our recent visit to Taipei allowed us to visit its historical spots through its free walking tour Taipei. While the experience was free, it gave us valuable insights into Taiwan’s rich history and what made it an impressive Asian country to visit.

The walking tour (with a professional guide) was our first among all our travels, so I personally didn’t know what to expect. Most of our walking tours were DIY like in Cagayan and Coron.

The trip was a group trip and it was our first to visit Taiwan. I personally had mixed feelings about the tour as it was a first, but since it was already booked, all I had to do was show up.

Where to Book Your Free Historical Walking Tour Walking tours in Taipei are quite common with various groups offering several tours including a historical tour, a modern tour, a golden age tour, and a night tour.

Some of the tours are free or tip-based while others have specific prices from 600 NTD and above.

The tour that we booked was for the free walking tour Taipei with Like It Formosa.

This particular tour was free of charge and was just tip-based so it’ll depend on you how much you are going to give the tour guides.

Once you have reserved a slot, an email confirmation from the tour company will also be sent to you with reminders on the time and date as well as the names of the guides and how to identify them at the meeting place. We met the guides at Exit 1 of MRT Longshan Temple Station at 10 AM. Our group was among the first to arrive so we waited a bit at the Longshan Temple just beside the MRT station exit.

When the guide (Coco) arrived, we immediately approached her and shown hear our voucher. Afterward, we waited a bit for the arrival of the rest of the group.

For those who are wondering what to expect joining the free walking tour Taipei, here are some of the things that you need to expect. Need I say more? Of course, you are joining a walking tour, so you’ll be expected to walk for at least 3 hours. Yep. You read it right, the tour starts at 10 AM and ends at 1 PM. That’s 3 hours of strolling around the historical stops in Taipei.

It might seem like a lot of walking but in reality, 3 hrs will just go by unexpectedly. There’ll be stops along the way and you have a lot of people with you and a lot of things to see that you won’t feel tired at all.

Well, except if it’s hot and you are wearing uncomfortable clothes. Now, that’s a different story, I guess. The tour company that we joined in had several guides in their team. Usually, its a pair of guides that’ll manage the group.

I think we were around 30 during the tour and came from different countries like the Philippines, Malaysia, UK, Canada, and Australia. Groups were going together, some came in pairs while others were alone.

The guides, Coco and Harry, took turns in sharing historical facts and current political climate of Taiwan as they guided us through historical sites.

They have divided the tasks while the other acted as a lookout for the rest of the group. Both were also young but knew their history so it was great to hear them talk about history and politics.

They also made sure that no one was left behind while the group was transferring from one site to another. The duo had a plastic fan with them to get our attention especially when they are about to speak.

The tour will take you to various historical sites in Taipei. I will not discuss it in length here since that would spoil the tour for you. Below is a quick overview of what we saw and what we did during the free walking tour Taipei: The Longshan Temple was basically our second stop since the first was at the Mengxia Park (also known as Bangka Park). We introduced ourselves at Bangka Park and had a brief overview of the history/ timeline of Taiwan.

The Longshan Temple is considered to be one of the largest and oldest temples, not only in Taipei but in Taiwan.

At the Longshan Temple, we were toured around the temple, saw its gorgeous structure and were introduced to some of the well-known Gods in Taiwan. Our next stop was at the Bopiliao Historical Block which was a few minutes walk from the Longshan Temple.

The Bopiliao Historical Block is part of the old walking district in the city. Bopiliao was one of the busiest and most prosperous commercial areas in Taipei during its prime.

Admittedly, if you are into Instagram, this is a gorgeous area for photo opportunities with its red-bricked wall and charming architecture. The Ximen Red House was third official stop. Official, because we stopped at a local ice cream joint along the way. LOL. The weather was hot and humid when we visited so ice cream was a welcome treat.

Ximen Red House, also known as The Red House, is a complex that is popular for its octagonal entrance and cross-shaped floor plan. It is a modern market with stalls filled with artistic items. This was also the first public space I have visited with a gender-neutral restroom. It gave me an impressive glimpse at how Taiwan stands in terms of gender equality

We took a few minutes break when we visited and the guides gave us two options: stay at the Ximen Red House or go with them to a coffee shop for those who want to grab some drinks.

Most of us from our group decided to stay inside the Ximen Red House and enjoy the air-conditioning unit. 🙂 I must admit, the displays on the second floor were impressive! While waiting for the rest of the group, we had a quick stop at an intersection with a map of some sort and some statues. Harry explained about these Gates build in the past by powerful families in Taiwan long ago. We also passed through the Chengdu Road at the Wanhua District which was pretty impressive, even in the afternoon. The Presidential Office is, as the name implies, the official seat of the President of Taiwan. It was originally built as the Office of the Governor-General of Taiwan.

The building is quite impressive and dominates an entire block, though renovations were being done when we went. We spent quite some time discussing Taiwan’s political history while here and well, with that background, you can feel the intensity of the discussion. 228 Peace Memorial Park was our 2nd to the last stop of the free walking tour Taipei. It is a memorial park dedicated to the victim of the February 28 incident.

This part of the tour was a bit dark as it tells one of the saddest moments in the country’s history.

We sat around a quiet area in the park while the guide, Harry, discussed at length the historical significance of the park. A few blocks from 228 Peace Memorial Park is the Chiang Kai-Shek Memorial Hall. This historical landmark is, admittedly, one of the most impressive structures in the city. Albeit, the most controversial.

The complex, which is also called the Liberty Square, was built with a lot of symbolism. So you should pay attention when you join the free walking tour Taipei. The conversation at this point was getting very interesting so be sure not to get distracted with the impressive facade of the white buildings and the gate.

This also ended our tour so we were allowed to enjoy the area, and maybe visit the structure of the area. So as mentioned, it is a free walking tour of Taipei’s historical spots. The guides get paid through tips given by the guests.

What to Wear and Bring If you want to join this free walking tour Taipei, here are some of the things that you need to bring:

1. Taiwan generally has a warm climate so be sure to wear light and comfortable clothes.
2. You will need comfortable shoes to fully enjoy the experience. It is 3 hours so you’ll need to come in prepared.
3. Stay hydrated and bring water with you.
4. Bring an umbrella or a cap or a shawl to keep away the heat.
5. Wear sunscreen too especially if you are to visit/ join on a summer day. I enjoyed the free walking tour Taipei with Like It Formosa. Despite the heat, it was fun getting around the city and seeing its incredible historical sites up close.

I personally thought that the tour was a great way to be introduced to the city. When we joined the Hop-On Hop-Off Bus Tour later that night, I got a chance to look at everything from another point of view.

The guides were very accommodating, entertaining and knew what they were talking about. People who love history will surely learn a lot listening to fun and (sometimes) sad parts of Taiwan’s history.

If you are to visit Taipei, this is one activity that I highly recommend for all history buffs out there! 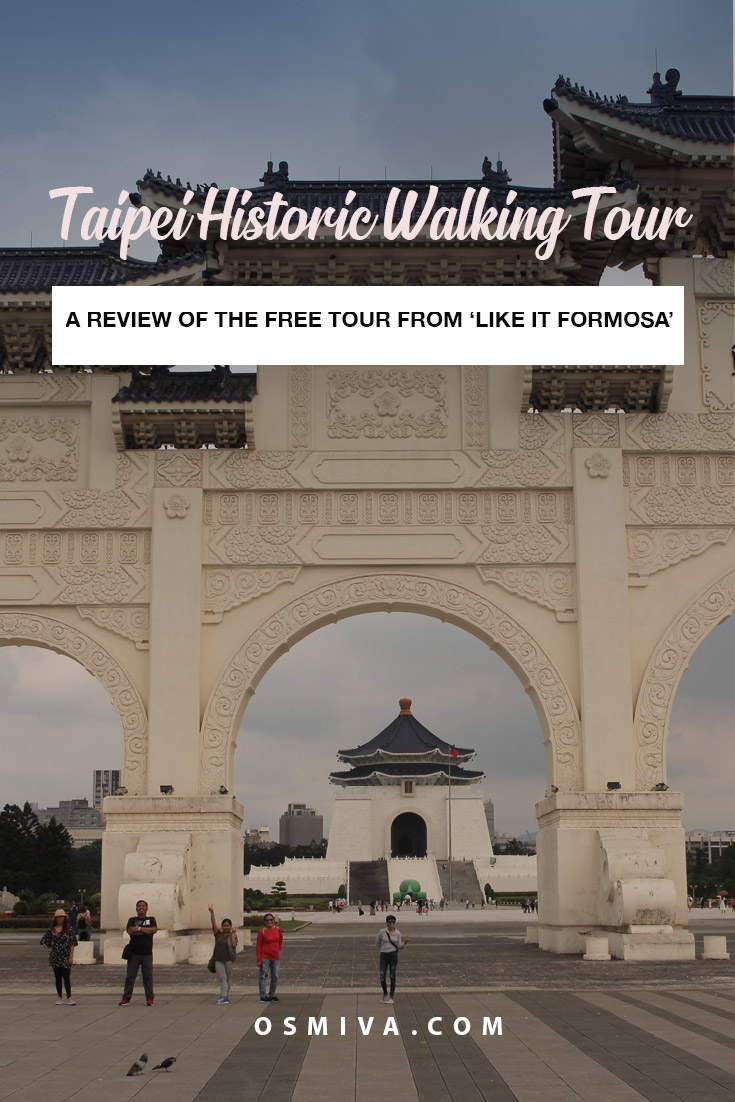